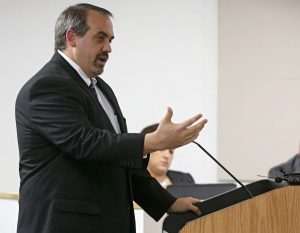 Aaron Dorr is a political activist with almost ten years of experience fighting for the Second Amendment in state legislatures including Iowa, Missouri, Minnesota, Wyoming, Wisconsin and more.

Working with the Missouri Firearms Coalition, Aaron ran a statewide grassroots lobbying effort that led to the passage of Constitutional Carry and Stand-Your-Ground legislation in Missouri, in 2016.

This included the successful override of then-Governor Jay Nixon’s veto, which cemented the passage of the largest gun bill in Missouri history.

In 2016, Aaron designed and implemented a massive election program for Iowa Gun Owners as they worked to expose anti-gun incumbents in the State Senate who had been blocking gun bills for years.

This program consisted of direct mail, social media, TV and radio ads, door-to-door efforts and more, resulting in the defeat of every single anti-gun incumbent, and the flip of the Iowa Senate.

In 2017, following up on the election success that gun owners achieved in 2016, Aaron ran a massive grassroots lobby program for Iowa Gun Owners that resulted in the passage of Stand-Your-Ground law in Iowa — ending a 6-yr fight.

Combined, Aaron’s efforts to expose anti-gun legislators and educate gun owners have seen 35 anti-gun incumbents removed from office in Iowa and a complete reshaping of the political environment in his home state of Iowa.

Throughout the process, Aaron has designed and implemented fundraising strategies that have raised millions of dollars for non-profit conservative organizations — enabling these organizations to be successful in the public policy arena.

In his spare time, Aaron also travels the country teaching conservative activists how to be effective in grassroots politics.

Aaron and his wife, Kristen, have four sons and two daughters and can, consequently, be found in their local Costco store on a regular basis.

Contact him if you would like to obtain specific help regarding your situation or to schedule a training seminar in your area.