Use these tactics to jump in the legislative mud-pit and start swinging!

“It’s hopeless, the whip count shows us down 11 votes and we’re just a week out from the vote.”

This was the text message I received last year from our bill sponsor in the legislature in Missouri, eight days before the one-day veto override session was set to take place in September of 2016.

A group that I work for, the Missouri Firearms Coalition, had been successful in passing Constitutional Carry legislation through the House and Senate by overwhelming majorities.

In Missouri, it’s standard to have a one-day session in September where the legislature considers which of the governor’s vetoes they want to override — having a constitutional majority in both chambers.

But just over a week away from this one-day session, the news was bleak.

We needed 109 votes to sustain the override, and the internal whip count numbers showed that we had maybe 98 votes in our column.

It’s Over, I Quit

If you’re not careful, it’s easy to fall into the trap of believing that what happens in the Capitol is reality.

It’s usually nothing more than a self-reinforcing echo chamber –- bearing little resemblance to what the grassroots are thinking.

In other words: just because the caucus says they’ll oppose your bill, doesn’t mean that they will.

Every time a member of the political class tells you how politics works, get used to asking yourself this question: If I believe them and do what they say, how does it benefit them?

If you don’t remember this, you’ll be spun every time you set foot in the Capitol and you’ll back off your bill.

In other words, you’ll quit and they’ll win — again.

I’ve Not Yet Begun to Fight!

Of course the insiders are ‘going to kill your bill.’

That’s because you’ve not run your program on the outside and involved your membership!

Remember, you should spend a minimum amount of time working inside the legislature.

Most of your time should be spent identifying and mobilizing grassroots activists.

They are the ones who put the pressure on their legislators!

So when you’re told your bill is dead — leave the building and get to work!

In Missouri, once we had the whip count, we also knew who to target.

And we unloaded on them.

We didn’t have time for additional mail, but we had been doing that all along keeping the pressure amped up and collecting valuable petitions to use the day of the vote.

We immediately rolled out a targeted social media program — targeting anti-gun legislators in their districts by zip code — with boosted posts to ensure every gun owner saw it and took action.

Here’s a sample meme that we used in that fight. 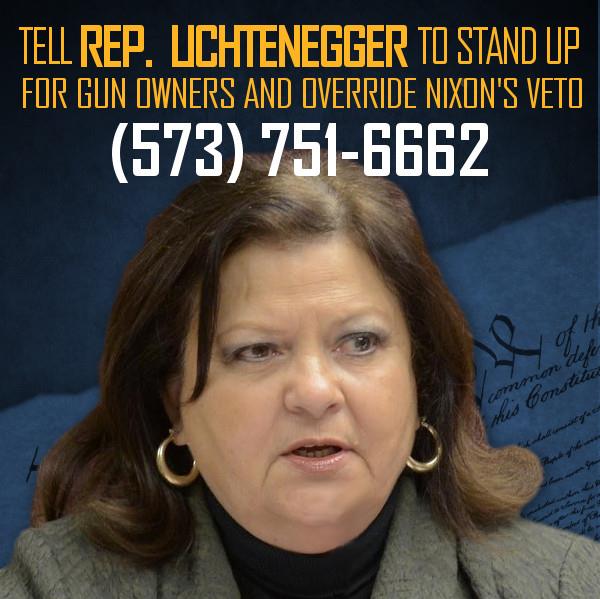 Next we ramped up our social media video alerts featuring our bill sponsor, letting folks know what was going on, and urging gun owners across the state to sign their petition in support of the override vote! 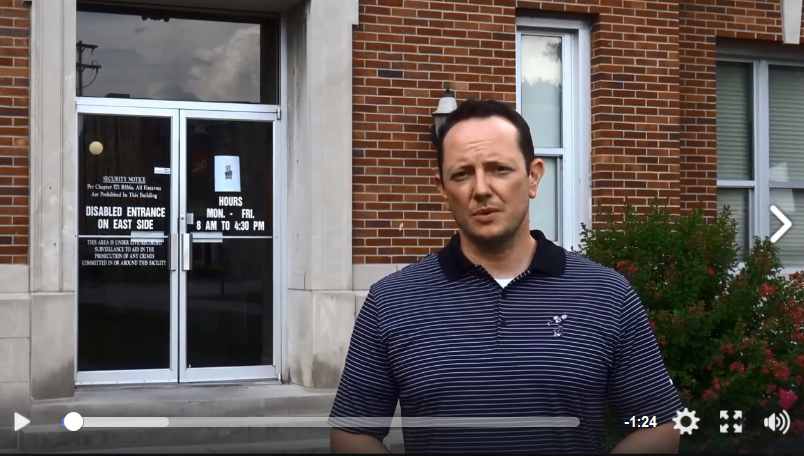 Then we turned to robo-calls, always a favorite tool for quickly and efficiently mobilizing gun owners and urging them to call our targets.

(While robo-calls are legal in most states, they are not legal in all states, so check your local laws to see if you can do them and what attribution may be necessary.)

The day of the override session we were out in force delivering petitions to the legislature by the thousands! 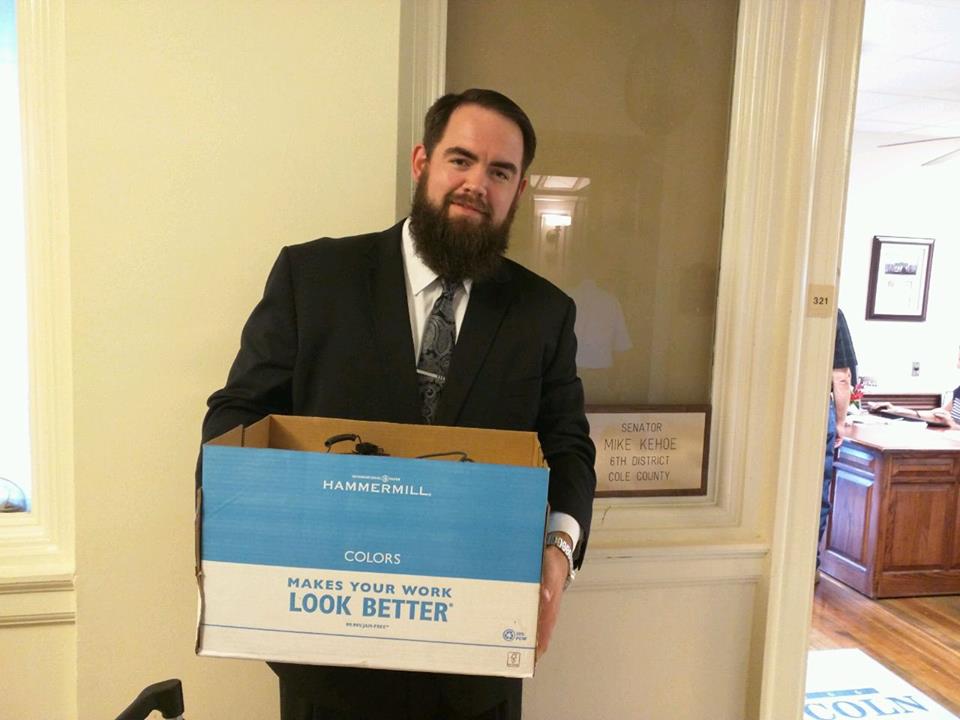 My brother, Chris Dorr, delivering petitions to the legislature the day of the override session last year on behalf of thousands of gun owners in Missouri.

Michael Bloomberg’s front-group was convinced we were going to lose.

Moderates in the House caucus were confident that they would stop the override.

All the ‘important people’ had their say — but they forgot about grassroots gun owners.

And with our help, they made their voices heard in a major way!

That’s why in the caucus meeting right before this vote came to the floor, some of our targeted legislators were borderline hysterical, saying that, “The last few days of my life have been a living hell.”

Every State is the Same!

And please don’t say, ‘That’s how it works in Missouri, my state is different.’

Politicians are predicable people, meaning politics itself is predictable.

Another example, this time from Iowa, where in a committee hearing in early March of 2017, the Republican-led House gutted the key provision from our Stand-Your-Ground law.

They said that removing these key provisions was the only way that the bill would pass, and they considered the matter closed.

After we alerted them using mail, email, social media video updates, and more, they inundated the Speaker of the House with calls and emails demanding that they restore the bill.

Five days later, they gave us everything we asked for via a floor amendment.

It’s Not Over Until It’s Over!

I’ve got a secret for you: politicians lie.

OK, maybe you knew that they lie to you.

But how many of you know that they lie to each other, or that they even lie to themselves?

You see, until they push the button and vote ‘Yea’ or ‘Nay,’ they don’t know how they’ll vote on controversial bills.

Sure they can talk a big game in a committee room surrounded by their friends and allies in the media.

But when you cut loose on them — in their districts — with a full program of mail, email, social media, robo calls, and lit drops, they often start singing a different tune.

One final note, if you run this program effectively, you will be hearing from your targeted legislators.

Some will threaten you.

Some will try to bribe you.

Some will cry and tell you that they are on your side, trust them, they’ll vote the right way.

All of them will try to get you to pull your program.

If they were solidly in your camp, you wouldn’t have to be pressuring them in the first place. So don’t let up now, for any reason, until the vote has taken place!

Knowing what to do, and having the resources in place to do it, are two different things.

You can’t mobilize people if you don’t have a list of supporters to mobilize.

Even if you have a list of folks to mobilize, you won’t be able to do it without the money you need to run the program I laid out above.

If you have a list and the money to make this all happen, but no one to help you do it, I can assure you that you won’t get it all done during the thick of the fight.

You can never lose sight of the fact that your primary objective is to add lists, money, and people to your organization to ensure that you’re always prepared for the next fight.

Politicians are experts at ‘spinning’ their constituents, fellow lawmakers, and even themselves — but they quickly see the light when they start to feel the heat.

But by harnessing the power of your grassroots members, you’ll be well on your way to ‘helping politicians see the light’ and advancing our freedoms at the same time!

By the way, if your organization needs more specific information, or wants to have me teach a 1-day seminar in your community, don’t hesitate to contact me.

31 thoughts on “It’s Not Over Until It’s Over — When They Threaten Your Bill, It’s Time to Fight Back”