One of the hardest jobs that you will have as a grassroots activist is to locate and recruit solid candidates to run for office.

No matter what, you are never far away from the next election in your state.

That’s why you should be spending your ‘down time’ looking to recruit candidates that you can get behind next year.

Candidate recruitment is tough work and not a problem that will solve itself.

But if you were able to obtain a record roll call vote on your bill last session, then you’ll need good candidates to work with as you seek to hold incumbents accountable for voting against your bill.

Sometimes you’ll be able to find a good or even great candidate, but I’ll warn you, they are far and few between.

A great candidate will not only have the right principles and beliefs as you, he or she will also be willing to put in the time to actually run for office!

This means they’ll go door knocking and attend that potluck dinner in the park that they really would sooner skip.

They’ll also be willing to take the time to send out thank you letters to high dollar donors and activists.

It means that they present well in public and that they can talk effectively to groups of people in large and small group settings.

A good candidate also knows that they can’t manage every aspect of their campaign, and will rely upon a trusted team of people to share that load.

Your good candidate hopefully has a very peaceful domestic life, ensuring that no family drama hits the headlines days before election day.

And of course, the big one, a good candidate will have no problem with asking people for money.

After all, the best candidate with the best beliefs and the best team is going nowhere fast if they can’t afford to get their message in front of the voters.

To be clear, if you find an otherwise great candidate for office who refuses to raise money for their campaign or expects it to be delegated to staff, walk away.

Seriously, if they don’t believe in what they are doing and in the issues that they profess to be championing, then the campaign won’t get off the ground.

But not all candidates are good.

Some people are just bad at the job of being a candidate.

Did you catch that?

Oftentimes, these are people that you know fairly well and that share the same beliefs that you do, which is why you gravitated to them in the first place –- this makes dealing with them even harder.

There are lots of factors that make someone a bad candidate, including:

We talked about this above, but some candidates are convinced that due to their beliefs, people in their state will hear about them organically and money will magically arrive in the mail.

>>> They turn to gimmicks to bail them out.

These are the candidates who think that everything they do online will be going ‘viral’ at any moment, resulting in a 5 point bump in the polls and new money galore!

Some of the nicest people on earth with the most deeply held convictions simply aren’t able to communicate those beliefs to other people in person. If they can’t communicate with other people, then they’ll rarely win their election.

What’s hard about being involved with a ‘bad’ candidate is that they are normally really nice people with a great personal story and the right convictions — you would want this person in office!

But as we said above, being a nice person and a ‘good’ candidate are two very different things.

Then there are candidates who are just ugly.

These are candidates who often have just one admirable quality, and that is that they support their issue.

But their personal life is a wreck that consumes all of their time at best, and is just waiting to make it to the 10:00pm news at worst.

(In that case, do them a favor and encourage them to drop out and focus on their personal life for their own sake.)

Other ‘ugly’ candidates are extremely difficult people to be around because of their arrogance or ‘take-it-or-leave-it’ approach to staff and the general public.

These are people who just rub folks the wrong way, virtually guaranteeing that they are going to lose on election night. 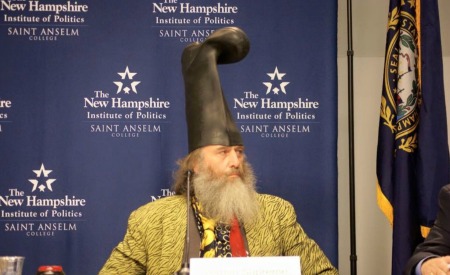 (Vermin Supreme was an actual candidate for President in 2016 and traveled the country speaking at forums. Not all ‘ugly’ candidates are this obvious, but know what to look for so you can avoid them!)

For others, they don’t know when to be quiet.

This happened to me in a race that should have been won by our pro-gun candidate in a central Iowa race in 2010.

When at a public forum, he was asked a softball question about a social issue and — after answering it very succinctly — went on to nuance out the answer for an additional 15 minutes!

When it was done, I don’t even think his wife agreed with his answer. The public sure didn’t, and an anti-gun legislator went on to take that seat.

Still other ‘ugly’ candidates have a real problem with drinking too much. As with any personal issue, it’s all but impossible for you to be able to get involved in that situation and bring it to a successful conclusion.

All ‘ugly’ candidates are masters of the blame game. As their campaign tanks, it’s never their fault.

You didn’t raise them enough money, you didn’t knock on enough doors, you didn’t find more volunteers, you this and you that.

Why All of This Matters Anyway:

Remember why we’re doing this in the first place.

We are interested in taking control of our legislature (or city hall, or county board of supervisors, etc.) so that we can advance our policy objectives.

If we don’t have the majorities we need, we can’t pass legislation.

Worse, if the other side gets a large enough majority, you won’t be able to stop them from taking away even more of our rights and freedoms.

That’s why you shouldn’t waste your time with ‘bad’ or ‘ugly’ candidates.

Defending the unborn, protecting the Second Amendment, lowering taxes, and stopping governmental overreach in general won’t happen if you don’t have the votes.

So if the candidate you’re helping won’t step up and do his job as a candidate — find someone who will!

Now that you know the kind of person you hope to recruit into running for office, there are a variety of places you can go to try to find them.

Start with organizations and groups that you are already involved with like church groups, local civic clubs, and volunteer organizations in your community.

But if you’re working for a non-profit like I am, don’t forget to look at your own member list and see if someone fits the bill.

Of course, people who are already elected to lower office such as your town mayor, city council members,

school board president, or county supervisors can be a great source for legislative candidates.

Either way, by using the information provided above, you should be well on your way to locating and recruiting solid, freedom-loving candidates.

If you have more questions on this or any other aspect of running a political organization in your area, contact me for help over the phone or to arrange a training seminar in your community.