Serious activists should be conducting a 5-column analysis if they want to effect policy change.

Many activists who properly understand that their job is to force the politicians to do the right thing, or hold them accountable at election time, make one key mistake during the thick of the fight.

They expend too much of their political ammo on one particular fight, or on attacking the wrong legislative target.

The result can be an enervating defeat, that leads to burnout amongst far too many good people.

So before your next legislative session starts, or before you get involved in that town or county level political battle, research your opponents, so you know what you’re up against!

To do that, you’ll need do down a 5-column analysis, where you’ll break the legislature up into categories based on where they stand on your issue.

Sure, we all know ‘that guy’ is terrible on your issue, but what about the thirteen incoming freshman who’ve never voted on your issue?

Or how about that sophomore legislator who is in line for that committee chairmanship? Will he still have your back if leadership threatens to take away his chairmanship?

And what about that guy whose district is directly impacted by your issue? Are you sure he’s voting the party line or might he be willing to cross over and ‘vote his district?’

You don’t know until you plot this out on a spreadsheet.

And no, doing this in your head isn’t sufficient.

If you are serious about trying to change public policy, then utilizing a 5-column analysis is one of the most effective things you can do as an activist.

The Good, the Bad, and the Ugly!

There are five categories that you will use in your 5-column. They are double pluses, single pluses, zeros, single negatives and double negatives.

I’ll describe each, so you know what these categories mean.

“Double pluses” are easy, they are the best there is. These are legislators that you will absolutely never have to worry about. They will always vote the right way, no matter what.

Oftentimes, these are your bill sponsors or other legislators with whom you’ve worked with for years. No one gets into the double plus category until they’ve voted on your bill!

In my experience working in half a dozen legislatures over the past decade, you’ll be lucky to have more than two or three of these in any legislative chamber.

“Single pluses” are more confusing. These are usually your evangelical Christians, good on your issue, not really a leader type legislators.

There’s nothing special about them, they don’t stand out, and while they are friendly as can be — they are terrified of leadership and will do nothing to rock the boat.

You may laugh, but for many of them, this is the highest achievement of their lives and they enjoy being respected, having taxpayer funded health insurance, and per diems.

They won’t be jeopardizing that for you and your cause. But, if your bill comes up on the floor for a vote, they’ll vote the right way.

“Zeros” isn’t just a euphemism for most legislator’s commitment to principle. In this case, a “zero” is a legislator that you know next to nothing about.

Usually they are newly elected. Either way, they have never voted on your issue and have made no public statements on it.

“Single negatives” are legislators who are usually going to oppose you, but may break with the party line because they are in a tough district and your issue plays well there.

With the right pressure, they may break ranks and vote for you. When you’re close to passing a major bill, you’ll often need every last possible vote.

Properly identifying these “single negatives” can make or break your vote.

“Double negatives” are fairly easy to define, they are bad on just everything! Think Diane Feinstein on a gun bill or Charles Schumer on a pro-life bill. Always bad, all the time.

When you are done, it should look like the sample below. But note the large number of zeros below — that should only exist in your first year as an activist.

Once you start paying attention, these zeros should have actual scores. 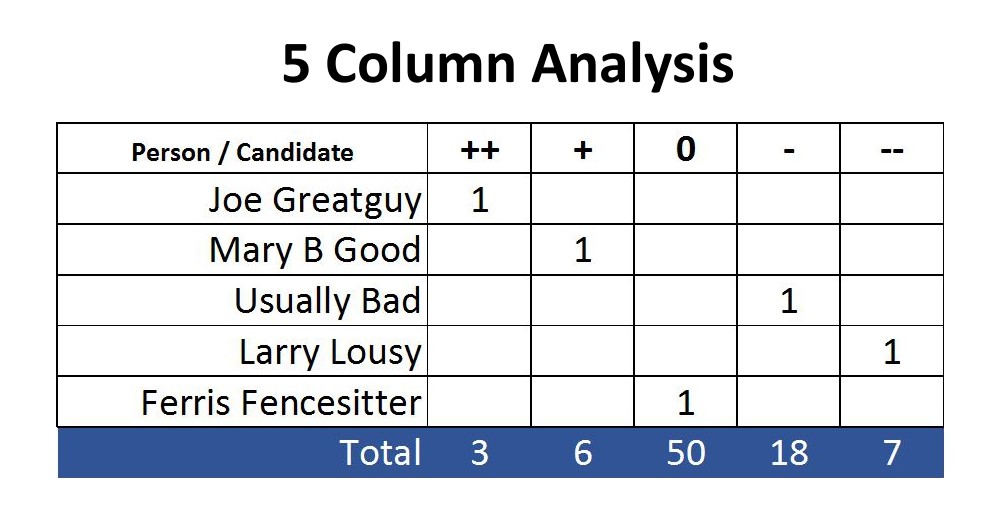 Scoring Someone Who You Know Little About

While incumbents are easy to score based on previous votes, it can be tough to decide how to score newly elected legislators.

Here are some places to look for insight.

Campaign Website; usually it’s full of fluff but you may find useful information here on core issues. Make sure to screen shoot anything important before they ‘clean up’ their site.

Public Statements; small towns still publish Q&A’s with legislative candidates in my home state of Iowa and you may find answers to your issues here if you’re looking for it.

Candidate Surveys; if your organization isn’t doing this, you are making a mistake (read more on this here), but if you are, your survey program should give you very useful information on where these newcomers stand.

Other Groups’ Surveys; other organizations of similar nature may ask questions that touch on your issue and they may publish those results or be willing to share the results with you.

When in Doubt, Downgrade!

Don’t be cute here. This isn’t a breakdown of what you WANT the legislature to do, it’s an honest assessment of what you think they will do if they vote on your bill today.

In other articles, I’ll teach you what to do once you’ve completed this list, as you’ll begin to hammer certain legislators based on the outcome of this 5-column.

And, if there is any doubt in your mind at all about where a legislator stands, downgrade!

It would be far better to be pleasantly surprised to see a single-negative or zero cross over and support you, than to see your bill die because three “single pluses” were actually “zeros.”

The 5-column isn’t just something you should do as you try to channel Frank Underwood, while binge watching House of Cards.

No, the results of your 5-column are going to dictate your groups’ actions for the next legislative session!

If you have no chance of passing your bill based on your 5-column, then your primary job will be to obtain a vote on your bill so you can expose the bad incumbents at election time — meaning you’ll spend very little money during session.

But if your 5-column tells you that you are just a vote or two away from passing a major bill, you are obligated to go ‘all in’ and get it done — likely spending heavily to ensure victory!

Alternatively, if you’re stuck right in the middle, you may opt for another course of action altogether.

Either way, this information gives you the ability to make real decisions based on real information.

Otherwise, you’re just playing games with your donor dollars and are more of a dilettante than a serious activist.

Armed with this information, once your bill begins to move and you are ready to apply pressure, who would you target?

The answer is the single pluses. We need 50% of the legislature plus 1 vote to pass our bill. That’s it.

Single pluses are the easiest to move into our category, meaning they are the cheapest to move.

Plus, in my experience, if you hit them in their districts, they will scream the loudest in caucus.

Their fellow lawmakers will get the message, and may come over to your side to avoid the pain without you having to lift a finger in their district.

Only an idiot would target a double-negative. Trust me, your organization doesn’t have the resources to try to impact them.

Even if you did, why would you waste that money when it’s far easier, aka cheaper, to move single pluses, then zeros, then single negatives — before you ever get to the double negatives?

If you’re not sure what I mean when I talk about going after a politician, read my article about that here.

For many ‘activists,’ politics is a game. Maybe they feel important being inside the Capitol or maybe they like being asked to speak to civic groups since they are one of the ‘cool kids.’

They will never accomplish anything of substance in the public policy arena. Ever.

If you are serious about trying to stop bad things from happening in your city, county or state — not to mention being able to pass good bills — then you will need every advantage you can get.

That starts with producing a 5-column.

If you need more help with your first 5-column analysis, or any other aspect of running or growing a grassroots political organization, don’t hesitate to contact me.

From a simple one-hour conference call with your core group, to coming to your location and offering a day-long training seminar in confrontational politics, I am here to help!