If you’ve been internalizing the material on this website, then you’re probably starting to understand the importance of building and maintaining a list for your organization.

In fact, one of the biggest mistakes made by the Conservative movement has been a failure to build and maintain lists of supporters.

Too often our side loses a fight and then gives up — thinking that all is lost because our candidate didn’t win this election or because our bill wasn’t passed into law this year.

The left understands that every engagement leads to another, so building and maintaining lists of supporters is crucial towards winning the next fight — regardless of what happens in the present moment.

It’s time our side understand this too.

The only thing separating you and your organization from any other activist is the number of supporters you can bring to bear. The more the merrier.

If no one is following you, if you don’t have a list of supporters you can mobilize, you’re not yet an effective leader in the political arena.

More, you should not be taking advice from someone who isn’t a leader, either.

There are three kinds of lists that you should be developing at all times: Donors, Activists, and Volunteers.

Each of these categories enables your organization to carry out your mission.

But how do I start doing this, you may be asking?

One name at a time!

One of the organizations I work for, Iowa Gun Owners, started out a few years ago with about $25 dollars, a list of just my immediate family members, and a “bad attitude.”

Seven years later, we have thousands of names on our Donor list, tens of thousands on our Activist list, and hundreds of Volunteers that are willing to fight at a moment’s notice to defend their right to keep and bear arms.

We now use direct mail, email, and Facebook to grow our lists -– but we didn’t always have the resources to spend on those techniques.

Instead, we attended gun shows to expand our list –- and still use this technique.

Since our focus is on the 2nd Amendment, gun shows are a natural event to attend; but your organization can certainly use other venues to expand your list.

For example, if you run a pro-life organization, there is usually an annual pro-life banquet in your state that would be a suitable venue. Another possibility would be a homeschool convention in your state.

If you run a liberty organization, you could attend Tea Party events, political rallies, gun shows, and more.

The key is to get out there and get started! You’ll be able to perfect your technique once you have some experience.

That said, here are some tips to make your debut list -gathering event a success – a bigger list at lower cost to your organization.

Asking people to add their name to a contact list, devoid of any political substance, is a great way to strike out at an event.

That’s why when we ask someone to support the gun rights fight in Iowa, we have them sign a physical petition addressed to the General Assembly, insisting that the legislature defeat or support a gun-related bill. And then we deliver it to the politicians.

This gives people something to sink their teeth into, and become part of the 2nd Amendment movement in our state.

At events like this, we ask for full name, address, email, and phone numbers. Sure, only half give us an email, but that’s fine.

On the internet, we ask for a lot less information as it harms the response. 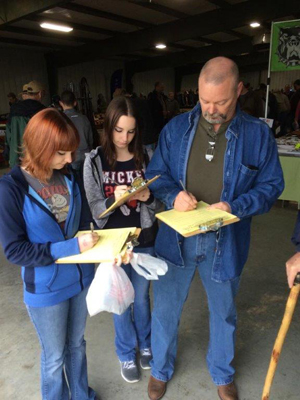 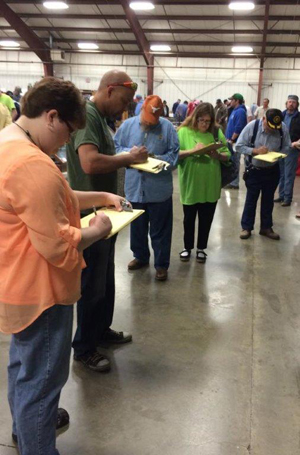 You cannot sit behind your organization’s table hoping that people will see your banner and charge up to you desperate to get involved in the fight for liberty.

It doesn’t work that way.

You may be wired that way, but most people are not, so be sure to stand in front of your table and aggressively court people’s attention.

Remember, you’re asking them to get involved in the fight for freedom in their community, so don’t feel bad about asking for a few minutes of their time.

Some people will gladly sign your petition, and some will scoff at your efforts and refuse to sign. So what?
Don’t get discouraged just because you strike out with some people. Some will, some won’t, next.

3. Have a display that looks engaging!

You don’t need a $5,000 inflatable banner or professional booth models working for you, but you do need to have a display that projects a level of professionalism so people know that you’re going to be using their information in a serious manner. 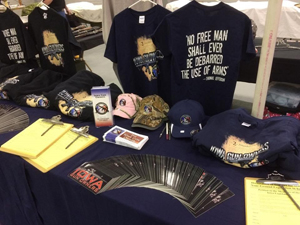 It’s nice to have something to hand out to folks who sign a petition. Whether it’s a simple tri-fold on your organization, a decal, or whatever – you need to come across as a serious organization. And you will recruit more members this way.

At the bottom of all of our petitions, we give people the option to join our organization as a dues-paying member and we give them a free t-shirt if they do.

We also sell organizational gear like hats, jackets, etc. for those who simply want to purchase gear.

The vast majority of folks you interact with will not donate. But that’s OK; you would have received zero donations if you were not asking!

In our experience, having attended well over 100 gun shows over the years, I can tell you that you’ll usually offset all the expenses of attending the event by the handful of folks that make donations.

In other words, you’ll build your organization’s list at NO COST — thanks to these donations.

Over the years, our organization has interacted with literally hundreds of volunteers. Some are excellent. Some just want to talk to us about what’s happening in the state house. And some flat-out won’t work out.

All are going to be nervous and will need some coaching on what to do. For those that stick it out, you can’t thank them enough! Be sure to reward them in some way for helping out; it makes it easier to get their help next time.

Some of the volunteers in the picture below have been to multiple events for us –- and they love it.

Developing your volunteers is a key to your overall list building strategy. 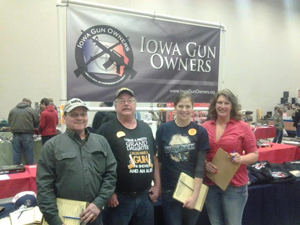 Besides being a lot of fun, these programs cost very little. If your organization is just getting started, these events can be a great way to explode your list with only a little money.

You can be even more effective by attending events in districts where you’ll be active in upcoming election cycles – every one of the names you gather there can be put to use right away!

The key is to get out there and get started. I know we made a mess of our first few events because we didn’t know what we were doing.

Learn from our mistakes, follow the tips above, and you’ll be off to a great start building a powerful list for your organization to hold politicians accountable!

5 thoughts on “The Group With the Biggest List Wins!”